Following our interview with FS model Michaela Crompton, we decided to get the male perspective on all things FS from fourth year veteran model, Jack Merriman. Reminiscing about old photoshoots and embarrassing moments, Jack tells us about how humbled he feels to be a part of such a great event.

Where are you from? What do you study?

I am from Buckinghamshire, UK, a small county about 30 mins northwest on the train from London! I usually just say London when people ask! I study IR (single honours).

When did you join FS? Why?

I joined FS in 2010. I really only tried out because I got scouted haha! But also, my academic parents and friend-group were involved in both fashion shows so I figured, why not. I actually tried out for both FS and DW. They’re both great shows but FS just seemed like a better fit for me.

So how has the rivalry between DW and FS changed?

I think the rivalry has actually diminished. Both camps have really forged their own image and taken on a different role. People used to be torn between the two shows because they were so alike; now you’d go to both because they’re so different. DW is creative in choreography and interactive with the audience. FS is more purist as a show.

How has FS evolved over the years?

I think it’s become well-renowned and more professional nation-wide. It’s so much bigger in every way; I mean even in terms of the audience. This year we had 1650 attendees at the show and another 300 at the afterparty. Compared to my first year, we also raise more money. You feel like you could be anywhere in the world watching a professional fashion show. I really applaud the committee for that.

What is the best part of the show for you?

The best part of the show for me is probably the opening – the adrenaline rush of the lights dropping, the music kicking in, the crowd going nuts and all the models pacing out onto the catwalk for the first time. It is the culmination of all the hours of hard work and preparation put in by everyone involved with FS, and being a part of it is something for which I am honoured and will never forget!

What was your favorite moment? Worst moment?

I don’t really have a particular favorite moment. I love the fact that each year we raise more money – so it’s more of a continuous favorite moment. If I had to pick one moment, I think it would have to be opening the show in my first year. That’s probably every model’s favorite moment. It was like nothing I had ever done before. I just felt so exhilarated and so humbled to be involved. My worst moment is definitely the end of the show every year. It’s a massive comedown. You go from a huge high to a huge low. The Dominoes pizza, after weeks of a strict diet, definitely softens the blow though!

What’s been your most embarrassing moment?

My most embarrassing moment was when I went out last year half dressed for an East Club walk, knowing the designer was there watching. I’d even met him in the run-up to the show that day. My bowtie was all undone, my braces were trailing down the back, I looked like a mess but I think people just thought it was supposed to be “disheveled, edgy fashion”! Come to think of it, another embarrassing moment was when I had to run to class and give a presentation immediately after I’d had my spray tan. I turned up orange. Weird looks occurred.

Who is your favorite designer?

My favorite photoshoot was definitely the model introductory shoot this year because it was warm! Normally we do shoots outside or it’s just freezing, this one was just so warm so I really enjoyed it. I don’t have a favorite theme but I do have a favorite location. It was in my first year at Hopetoun House. It’s an old stately home and it really looks like Downton Abbey. 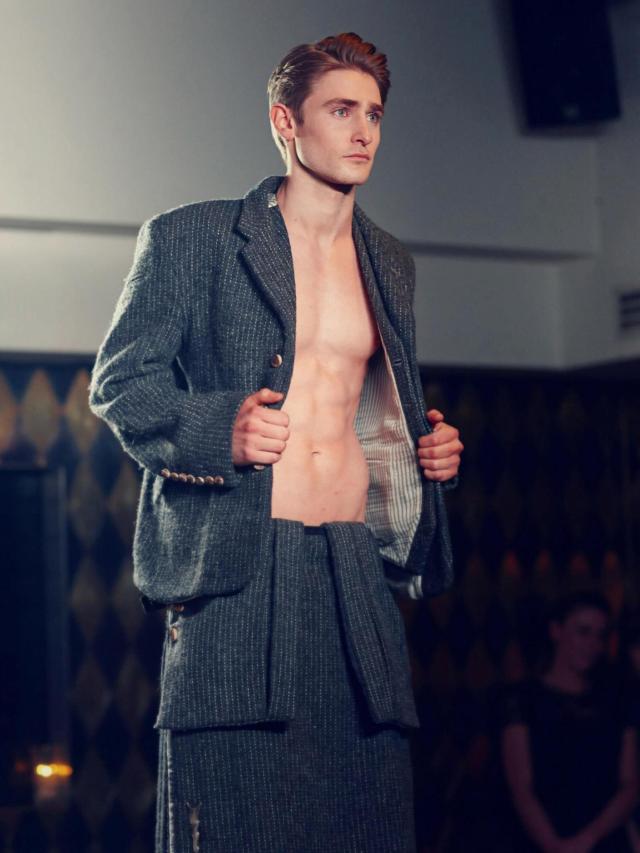 Had you ever modeled before?

Yes bits and bobs for a few brands, and FS is great for opening doors to further modelling jobs. For example, Tommy (also modelling this year) and I were involved in the SS13 season collection shoot for East Club – an up and coming menswear designer, also featured in this years FS2015 show!
Would you ever consider modeling after university?

Yes, I would certainly consider it for part-time work as you meet a range of interesting people and have the opportunity to travel to some great places for shoots and so on. I can’t see it being a career for me though.
What was your last show on Saturday like? How were you feeling as you did your final walk?

The last show was incredible and the perfect end to 4 years in FS! Honestly, everything ran smoothly and right to the timings we had practiced. All the models nailed it and it just seemed as though everything came together on the night. It felt incredibly professional and I am always amazed, year after year, at how a group of students juggling degrees can organise and run such a stunning event. Plus the amount raised for charity rises every year – truly spectacular and the main aim of all of this! As I came out for my last walk I felt proud, humbled and grateful for all the great opportunities FS has given me and for being a part of a motivated group of people keen to help develop such a special concept, which ultimately raises funds to help others. FS is a legacy which will live on for years to come and I am so pleased to have played a part (however small) in it.

Tags: FS, in the life of a model