Through the billowing wind and thick mist and clad in black-tie, L de C marched in funereal apprehension and dipsomaniac anxiety to the Scandinavian Society’s Nobel Ball. It took no diviner or soul-seer to predict that the night would be rough – hoarders in the future will stockpile Ibuprofen, and wily traders will rush to buy stocks in Boots in preparation for this traditional annual doomsday.

Appearances can be deceiving, and the pleasant novelty of a venue change may have prematurely pacified many. However, this year round Nobel Ball upscaled to Hotel du Vin. This was very much an upgrade from its past spiritual home, the Scores Hotel, which I had railed against following the Black Tie Reeling Ball a couple of weeks ago. Ghastly place.

However, while this leveling-up brought with it the implication of price-hikes, there was no significant increase in ticket price, a welcome relief for many. Though the numbers have yet to be crunched for long-term costs to one’s liver.

Another fear was that higher prices would mean less wine for revellers, which L de C can (unhappily) report was certainly not the case as he is always punished on the dinner table by vicious and thirsty Vikings. One significant absence was that of Acquavit.

The Crayfish Dinner earlier on had been so raucous (it was basically over in an hour with various people found drunk and naked in the toilets of the Byre, alongside other juicy gossip) that bringing out the big gun Acquavit was deemed ‘too much’. 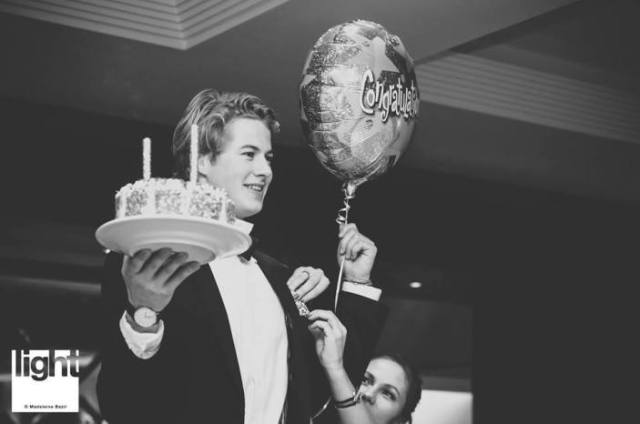 It was not completely absent unfortunately (horrendous stuff), and some lucky ducks were given the chance to down that poison – particularly as part of the bidding after the ‘Ode to the Women’.

A fantastic tradition, the latter followed from the ‘Ode to the Men’, where Camilla Arntzen and Madeleine Eckbo delivered a long string of cheeky and at times raunchy jibes at the men of St Andrews, with various spicy references to known male misdemeanours.

The ‘Ode to Women’ countered this in form, boozily and boisterously delivered to a chortling audience by Alex Skaugen and Spencer Bienvenue, with a certain Laurence Cardwell belching out shot-timings rather out-of-tune-edly with a bugle.

Following this, Tatler-designated ‘BNOC’ Mikkel Skajem, who had been offered a barrage of birthday shots through the course of the night, was auctioned off to a table who could enjoy the simple pleasure of his company for the rest of the evening – the currency for this exchanged being measured in shots of – delectable – Acquavit. £40 was the final number, a steep price to pay.

As pudding came and left, as usual relatively neglected by already wobbly diners, we were shepherded downstairs to the painfully-named ‘Society Room’, and were surprised by a blast of vocality from the Other Guys, cracking out some classics – Abba’s ‘Does your mother know’ is still a particularly persistent earworm.

Soon enough, however, we wobbled back up the stairs to our previous room, now cleared of most tables, chairs, and general debris. There the staggering began in earnest, as half crawled to the bar, and the rest teetered enthusiastically on the dancefloor to the rumbling rhythm of Asquire’s disk jockeying.

Evidently, despite the range of battle wounds acquired on the dancefloor and alcohol-related attrition, the congegration’s party stamina had yet to be snuffed out. The closure of the venue by a slightly grumpy manager led to a mass exodus to that citadel of ballistic post-mortem afterparty quakes – the much battered Bastion of Bell Street (where this reviewer unfortunately lives).

There, survivors were greeted by a table stacked high with hundreds of cans of Tennents, good old ‘Vitamin-T’ with which to conclude the night and guarantee an absolutely useless next day. There the party ground on for another healthy couple of hours. A morning inspection by this bedraggled reviewer found a smashed window, blood on the walls above the mantelpiece, a sea of used ‘Skruf’ snus sachets, and one cadaver – who fortunately came to and scuttled off.

All these clues have led L de C to conclude that as bloody usual, the Scando Soc is to blame for another night of toxicity, wild-eyed euphoria, and bombastic booms worthy of the inspiration of the ball, Alfred Nobel, inventor of dynamite. A rave par excellence, making no allowances for a productive day at the library the next day, let alone anything beyond crawling to the fridge.